Which Onion Variety to Grow?

Which Onion Variety to Grow?

Which Onion Variety to Grow? Have you ever planted onion seeds, without any success? The reason is more than likely that you planted an onion variety that is not suited for your area.

Onion bulb formation is triggered by the number of summer daylight hours. Onions are photothermoperiodic – that means they are sensitive to temperature and also to day light. Onions quit forming leafy tops and begin to enlarge their underground stems (bulbs) when the day light each day reaches a certain length. The amount of day light needed for an onion plant to begin forming a bulb varies by variety. Each variety has its own genetically determined bulb formation trigger. 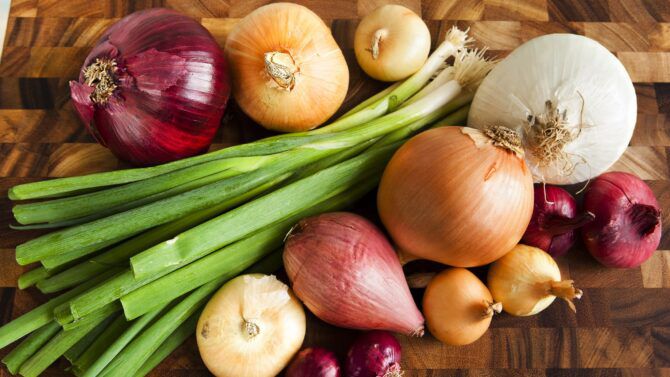 Although onions are essentially a cool season crop, in South Africa they are planted virtually all year round. In the Northern regions of the country sowing is normally from February to April, in the central region from April to July and in the Southern regions transplanted from July to October.

Bulb-forming onions can be divided into three types:

Which Onion Variety to grow in your garden?

Burdock medicinal uses are numerous and it has been used for ...
END_OF_DOCUMENT_TOKEN_TO_BE_REPLACED

Growing thyme - from seed to harvest. Thyme is perfect ...
END_OF_DOCUMENT_TOKEN_TO_BE_REPLACED

There are many different Broccoli types. Broccoli (Brassica oleracea), a ...
END_OF_DOCUMENT_TOKEN_TO_BE_REPLACED

English, French and German Thyme are the most well known ...
END_OF_DOCUMENT_TOKEN_TO_BE_REPLACED